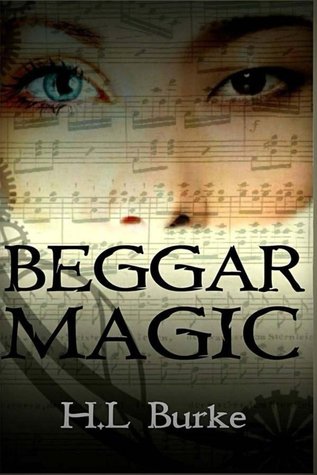 In Gelia City, magic is music: a constant ever-changing melody known as the Strains. Hereditary ability to use the Strains divides the city into two classes: the wealthy Highmost, who can access the full potential of the Strains, and the Common tradesmen, who are limited to mundane spells, known as beggar magic.

With the help of the Strains, Common teen Leilani rescues and befriends a gifted Highmost girl, Zebedy. The girls’ friendship opens Leilani’s eyes to the world of the Highmost. She’s intrigued by Zeb’s close relationship with the Strains, and longs to know them as she does. Zeb, in turn, comes to depend on Leilani’s strength and intelligence, making them an inseparable team, ready to take on anything with the Strains at their back.

As their unlikely friendship strengthens and endures, Zeb draws Leilani further into the Highmosts’ intrigues. Beneath the polished, academic facade of the Highmost manors lurks a threat to the Strains. An unknown force consumes their music, leaving only heart-rending silence behind.

Leilani and Zeb will do anything to save their beloved Strains, but as the silence grows, they face danger their previously sheltered lives could never prepare them for. Whoever is behind the death of the Strains is willing to kill to keep their secret safe. To preserve the Strains, the girls may have to sacrifice their friendship, or even their lives.

Leilani took the stairs up to the Brightlys’ third story apartment two steps at a time. She tugged at the bell rope, and the door burst open.

Zeb grinned. In her hand she clutched a piece of parchment similar to the one that bore Leilani’s ill news. For a moment Leilani’s smile faded. The Strains whistled with an up-note she almost imagined to be a question. She forced a smile.

“You’re here! Come in! I have so much to talk about.” Zeb took her hand and pulled her through the sitting room into the bedroom.

Though Leilani had only seen the inside of the Brightlys’ home, Zeb had informed her that all the Highmost quarters shared the same two bedroom and a sitting area layout. Their meals came from the shared kitchen with its army of cooks and porters. Even their baths were communal, a luxurious, heated affair where people often socialized.

“What if a family has more children?” Leilani had asked, having noted that Highmost, even at the Country House, rarely shared bedrooms.

Leilani didn’t press the issue. Her mother always cautioned her about meddling in personal matters.

Zeb’s artwork, watercolors filled with vibrant shades and swirling shapes which represented the Strains, decked her walls. Three bookshelves overflowed with volumes, many of which Zeb had loaned her over the last year. Purple curtains matched the coverlet of her bed and the dozen or so pillows. The plush carpets were starry sky blue. A mobile of silver stars twirled from the ceiling. Leilani loved Zeb’s room.

Zeb sat on the bed, then stood and glanced out the window only to jump on her bed three times before collapsing cross legged into the cushions. No longer required to wear her Country House uniform, Zeb wore simple tunics and pantaloons in various colors, periwinkle today.

She laid the folded parchment before her. “Oh, I wrinkled it. Would you fix that for me?”

The Strains hummed like Mrs. Weaver when she busied herself in the kitchen, wielding her wooden spoon like an artist’s brush. The creases in Zeb’s document flattened and vanished.

“Thank you. I want to keep it forever.” Zeb sighed and looked up at Leilani with sparkling eyes.

“My future!” Zeb unfolded it and held it forth.

The paper bore a lot of letters in fancy, near indecipherable calligraphy. Zeb took it back before Leilani got further than, “To the honorable Miss Zebedy Brightly, graduate of Madame Clavia’s Academy for the Gifted . . .”

“You’re supposed to query all the manors, to see where there are openings, in case your first choice doesn’t want you. Well, I only want Research, but Mother said Research is the most competitive manor, and she made me send out multiple letters, one to each manor, even Civics.” Zeb’s nose wrinkled. “Anyway, letters went out and letters came back. Accepted Weather. Accepted Healing. Accepted Art, but no news from Research until this morning.” She waved her paper in the air.

Zeb sprang off the bed and twirled around, waving the letter so fast the flapping page sounded like a bird taking off. Leilani stared at her exuberant friend, and her mouth twitched. The disappointment of her own rejection returned full force, but she forced her face to remain impassive. Zeb was happy now. Leilani couldn’t ruin that. The Strains droned in a minor key.

Zeb stopped mid-spin and faced Leilani. Her lips quirked downward, and her brows came together. “The Strains say you are sad. Why are you sad?”

Leilani shook her head. “It is nothing.”

“No, Leilani, you don’t get sad over nothing. People call you names, you snap back. A dog could bite you, and you’d bite back, but you don’t get sad. If you are sad–and the Strains say you are, so don’t lie–there must be a reason.”

Leilani cleared her throat, shuffled her feet, and murmured, “The Merchant Guild said no.”

“But why?” Zeb dropped her precious letter and pulled Leilani into an awkward hug. Zeb’s chin poked her in the forehead. Still, Leilani preferred that to looking Zeb in the eye.

When Zeb released her, Leilani concentrated on the carpet.

“What will you do?” Zeb asked as she stooped down to retrieve her letter.

Leilani shrugged. “There are other guilds, other trades. I don’t have to decide right away.”

Zeb nodded, folded and unfolded the letter, and sat back down on the edge of her bed. “Leilani, there is . . . well . . . I assumed you would get your apprenticeship, but perhaps your misfortune is my fortune. Do you know about manor fellowships?”

“Aye, that’s what you applied for, isn’t it? It’s like an apprenticeship but to a Highmost manor rather than a trade.”

“Sort of. Since I’ve been accepted into Research Manor, I will live there now. I will also be assigned an aide.”

Leilani frowned and said nothing.

“It’s an important job. Usually the aide is Highmost, but they don’t have to be. Anyway, there is no law. I checked a long time ago in case you changed your mind about the Merchant Guild. Father knows people in Civics–they’re the manor that oversees assignments.”

Leilani swallowed. “Are you asking me to be your aide?”

“Yes! I can’t imagine working with anyone else. Think how much fun we could have? In our own apartment? I have so many ideas for projects. Of course, for the first years of my fellowship, I’ll be assisting a senior fellow, but either way, so much fun!”

Leilani chewed her bottom lip. She loved Zeb like family, like a boisterous, exhausting little sister. Still, Zeb could be overwhelming. Did Leilani really want that every day from now on?

“I don’t know, Zeb,” she said. “Wouldn’t you essentially be my boss? Wouldn’t that be awkward?”

“It’s me, Leilani. When have I ever been bossy?”

“Do you want an exact number? Do you have a counting frame?”

Zeb frowned at her. “I’m not that bad. You always have a choice.”

“‘It’s easier to ride the current than to fight the tide,’” Leilani used one of her grandmother’s favorite expressions.

Zeb stuck out her bottom lip, but in the same moment her face brightened. “Yes, but it has always been a fun ride.”

“You don’t have to, I guess, but . . . if you don’t, once my fellowship starts, we’ll never see each other. Junior fellows rarely leave the manor. My mother always told me once you were in an apprenticeship and I in a fellowship, there simply wouldn’t be time for us to be friends. I swore I wouldn’t let that happen. You’re my best friend, Leilani.”

Leilani avoided Zeb’s pleading eyes, trying to think logically about the matter. The Strains tickled her ears, a tinkling noise this time, like thousands of miniature bells.

Zeb grinned. “The Strains think you should.”

Leilani sniffed. “So you say.”

Zeb shook her head until her hair covered her face then brushed it behind her ears. “I would never lie about the Strains. They’d throw a fit if I did.”

The bells hit a crescendo, perhaps the loudest Leilani had ever heard them. Zeb’s smile nearly squeezed her eyes shut.

Leilani had envied Zeb’s place at the Country House. This could be her chance, her only chance, to experience the Highmost world. Would she fit in? After all, she was Common, and as much as Zeb tried to sell it, an aide sounded a lot like a servant.

The Strains grew louder, until the ringing almost became unbearable. If they wanted it so badly, it had to be for a reason.

Leilani smiled. “All right, Zeb. Sounds like a plan.”

*I received this book for review from the author. This in no way affects my thoughts expressed below*

So I’m pretty sure y’all know by now what a  big fan of H.L. Burke I am. If you don’t, well it’s safe to say you’ve probably been living under a rock. She has an amazing ability to write stories that pull you in and don’t let go, that take you on a journey of imagination and magic and just all around awesomeness.   So, yeah, I couldn’t wait to dive into this new world from her.

In Gelia City, music is pretty much everywhere. In fact, it holds a kind of magic, these Strains. The Highmost are able to access more of it than the Common, and that is what separates the two classes. This book is all about the story that unfolds when a Common teen girl, Leilani, rescues and befriends Highmost girl, Zebedy or Zeb as she’s often called.

This book was as beautiful and well written as all of Burke’s previous novels I’ve read. I think one of the main reasons she’s one of my favorite authors is she’s one of the few who truly can create these magical world’s that are so unique and yet charmingly realistic at the same time. I loved learning the ins and outs of the city as I read the book, and I especially loved the way information was given slowly over time so that by the end of the book I really felt like I was in Leilani’s shoes, that I had the opportunity to hear the Strains and help solve the mystery that plagues them along with Zeb, Leilani and their friends they meet along the way.

All I can say is if you enjoy carefully crafted worlds that will truly have you lost in them, then I recommend you try your hand at some Beggar Magic.

Visit H.L. Burke Around the Web:

Enter to win a paperback copy of Beggar Magic and a $10 Amazon Gift Card!

Lola and the Boy Next Door by Stephanie Perkins
Prelude by A.M. Hodgson
The Demon Tailor by Susan McCauley
Remember the Stars by Marisa Oldham and Carraine Oldham