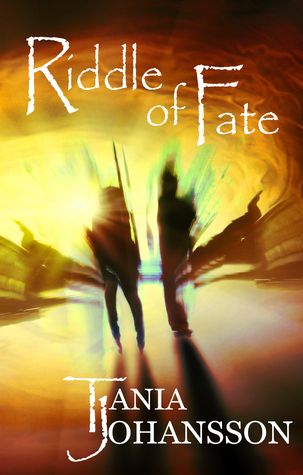 Khaya’s life, a life the Order say was never meant to be, is thrown into turmoil when she discovers she has a second ability. The Company who employs people like her – with rare and special abilities – insists that having more than one inevitably leads down a dark spiral into madness. So they are watching and waiting, ready to terminate her at the first sign of trouble.

Now, on the run from the Company’s agents while trying to prove her sanity, Khaya realises they are not the only ones she should fear. Angels are working towards her demise as well.

The question that haunts her is this: What did she do that was terrible enough to elicit the wrath of angels? And can she trust the mysterious Derrin, or is he the cause of all her tribulations?

My Thoughts on Riddle of Fate:

When I opened up to the first page of Riddle of Fate I was immediately drawn in. This book is told in alternating points of view between Khaya and Derrin, starting off with Derrin.

Khaya lives an ordinary life with a few exceptions. One is that she has the ability to predict future events by reading things from newspapers, articles, etc and then transferring the things she senses onto paper. Another is that after being found she works for the Company, a corporation fronted by the local library that houses people with abilities just like Khaya’s. Though she doesn’t like that she cannot see her own predictions, life is going okay. That is, until she develops a new ability. Things start to drastically and Khaya soon learns her life could be at risk. Okay, maybe her life isn’t so ordinary…

I absolutely loved this book! The point of views flowed between the two main characters so smoothly. I really liked that not everything was revealed at once, it was gradual throughout the book. In fact, I found myself pretty surprised at some points! Yes, sometimes I saw things coming, but others I was almost shocked by the plot twists(in a good way!)

Overall, for fans of fantasy and paranormal books this is not a book to miss!